Nature can die, man is eternal.
Although nothing can bring back to life the smile of this or that,
there is a clear difference between "me" and "mine",
which unaware people have called death.
From "The Book of Words" by Abai Kunanbaiev

When we do theater it often happens to be pushed to resolve eternal contrasts. We want to express complex situations or wonderful events with simple actions, movements and voices. This goal is still the most important when reviving the Kazakh epic story of Kozy Korpesh and Bayan Solu, along with the actors of the theater of S. Karin Siffulin in Karaganda.
Starting with Gabit Muzriepov's theatrical reduction, we encountered the poetic-philosophical work of Abai Kunanbaiev, a Kazakh man of culture from the end of the eighteenth century who lived in an aul, the typical village composed by yurtas. Through his words and his music, our starting story, seemingly a kind of Romeo-and-Juliet of the steppe, found a provisional solution. From the work of this philosopher of the aul -universe, through his criticism of the society of the homo homini lupus, and thanks to his conception of reality as a harmony between Will, Reason and Heart, the figure of Bayan's father, Karabay, has emerged so preponderant and antithetical to become the fulcrum of our interest. It will in fact be Karabay and his dialogue with his own conscience to guide us during the this theater show.

View the embedded image gallery online at:
http://www.ateliercuncheon.it/en/researh-theatre-karabay#sigProGalleria4fceef1a29
Prev Next 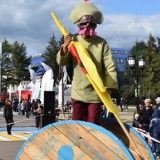 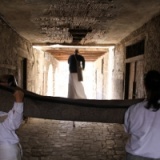 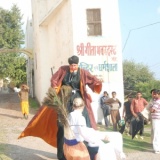 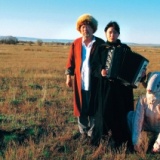 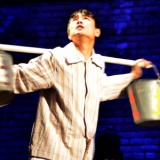 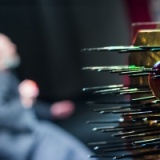